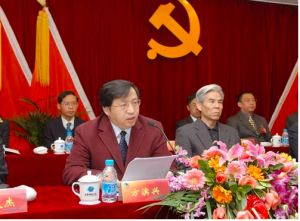 For those of you who believe that the U.S. should give up oversight of ICANN, here’s an eye-opener for you. Google’s popular Gmail email service suddenly fell offline in China, a reminder of the challenges that U.S. Internet companies face even as they kick up their efforts to do business there.

Data on Google’s website showed Gmail traffic in China dropped sharply beginning on Friday. The service appeared to be blocked on computer applications that were previously able to connect with it.

Google spokesman Taj Meadows said Monday that “there’s nothing wrong on our end.”

But they have also stressed controlling the Internet with an eye toward social stability. Foreign services such as Facebook Inc., Twitter Inc. and Google’s YouTube, among others, are blocked in China.

The Chinese government has generally focused on blocking services that might allow Internet users to organize opposition movements by reaching lots of people simultaneously—services such as Facebook or Twitter—as opposed to an email service.

Gmail’s website as well as other Google services were effectively blocked in China in June, ahead of the 25th anniversary of Beijing’s deadly suppression of the Tiananmen Square pro-democracy protests.

Since then, Gmail users had still been able to access the service using third-party email applications such as Microsoft Corp.’s Outlook or Apple’s Mail. Now that access appears to have been cut, and it isn’t clear whether it will return.

Google clashed with Beijing in 2010 after the company decided to stop censoring search results in China. Google shifted most of its Chinese operations to Hong Kong as a result, and many of the company’s services on the mainland have since worked intermittently.

Despite the roadblocks, American Internet companies are still actively trying to establish operations in the country. Facebook has a sales office in Hong Kong to help sell advertising space to Chinese companies that want to reach a global audience. The company is exploring the possibility of opening a mainland office to provide more support to Chinese advertisers locally, an executive said earlier this year. Thus far, it has not done so.

Facebook Chief Executive Mark Zuckerberg has suggested he would like the social network to be available in China. He recently wowed an audience at Tsinghua University by speaking in passable Chinese.Twitter Chief Executive Dick Costolo visited China earlier this year, and the company also has a sales office in Hong Kong, though the prospect of its service being made available remains remote.

Some Internet companies with operations in China are trying to manage censorship requests. When professional-networking service LinkedIn Corp. launched its China site in February, Chief Executive Jeff Weiner said he anticipated the company would receive requests to filter content. It began receiving such requests around the time of the Tiananmen anniversary and notified at least one reporter that a post he had written about the anniversary was to be removed not just in China but globally. A LinkedIn spokesmen at the time said the company’s policy is designed to protect people in China from government retribution.

Google announced new measures in November to help Chinese software developers profit from selling their apps outside the country.It is also considering ways to bring its Google Play mobile-app store to the domestic Chinese market.

China’s top Internet regulator, Lu Wei, traveled to the U.S. this month for meetings in Washington and Silicon Valley with tech executives including Mr. Zuckerberg, Google Executive Chairman Eric Schmidt and Apple Chief Executive Tim Cook . The trip came just a month after he said at a conference held in China that Internet controls are a sovereign issue and that the Web should be a “free and open place, with rules to follow.” I wonder how you say “free and open” in Chinese. Apparently they have a different definition that we do in the U.S.

Thanks to WSJ.COM and CHUIN-WEI YAP and ROLFE WINKLER, and

One thought on “Google’s Gmail Blocked in China”