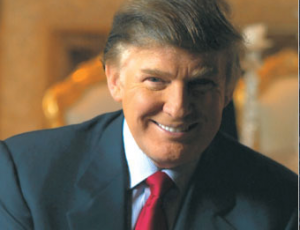 Attorneys representing Trump filed a countersuit against Yung, 34, at the U.S. District Court in Brooklyn in March 2013, seeking damages for “federal cybersquatting.” That’s defined by the Anticybersquatting Consumer Protection Act as “the registration as domain names of well-known trademarks by non-trademark holders who then try to sell the names back to the trademark owners.”
Trump was seeking the maximum damages allowable — $100,000 for each of the four Trump-related domain names.

Trump is a trademark with the United States Patent and Trademark Organization and the name is associated with high-profile business ventures. The four websites were developed in 2007, the same year the Trump organization announced plans to build Trump-branded hotels and condominiums in Mumbai and Bangalore, India.

The Trump Organization demanded that Yung hand over the websites. In 2011, Yung filed a complaint seeking to keep the domain names, citing fair use and First Amendment rights. In 2010, Yung rejected $100 per domain that Trump’s lawyers offered him.

The ACPA is still alive and kicking, so if you have an obvious trademark infringing name, you may want to think twice about keeping it, as trademark holders now have 3 ways of getting it back; UDRP, URS and ACPA.

Thanks to Haley Draznin and CNN, and